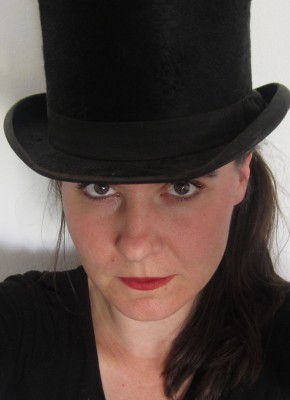 A native of Slovenia, Darka Erdelji received a Masters of Arts in Puppet Scenography from Prague’s Akadmie Muzickych Umeni. She lived in St. John’s with her Newfoundland-born partner and their children for several years; during that time, she began collaborating with Andy Jones, first on their puppet play “The Queen of Paradise’s Garden”, and then on their acclaimed series of illustrated Jack tales. Darka currently designs puppets for Lutkovno Gledališče Maribor, a state-of-the-art Slovenian puppet theatre housed in a renovated medieval monastery.

In the summer of 2015, Darka's artwork for two of the Jack books was featured at “Image. Word. Design: Exploring Picture Book Illustration in Atlantic Canada,” an exhibition at the Acadia University Art Gallery in Wolfville, Nova Scotia.

Her books with Running the Goat are: The Queen of Paradise’s Garden, Jack and the Manger,  Jack and Mary in the Land of Thieves and Jack, the King of Ashes. The fifth book in this on-going series, Jack and the Green Man was published in the fall of 2016.

In June of 2017, Polly MacCauley's Finest, Divinest, Woolliest Gift of All, her collaboration, this time with Sheree Fitch, was published.