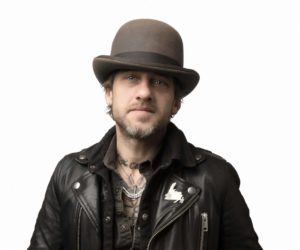 Joel Thomas Hynes is a multidisciplinary artist from Calvert, Newfoundland.

He is the author of numerous acclaimed books, including Down to the Dirt (adapted to screen in 2008), Right Away Monday, Straight Razor Days, God Help Thee: A Manifesto and Say Nothing Saw Wood (adapted, by Hynes, to the big screen under the title Cast No Shadow and won numerous awards including four Canadian Screen Award Nominations).

His most recent novel We’ll All Be Burnt in Our Beds Some Night was longlisted for the ScotiaBank Giller Prize, and won both the BMO Winterset Award and he Governor General’s Award for Fiction.

JTH has also written and directed a couple of award winning short films – Little Man and Clipper Gold and wrote and directed several shorts during a recent residency at the Canadian Film Centre in Toronto. Hynes has also been working as an actor for almost twenty years and continues to perform lead and principles roles in both television and film, including shows such as Orphan Black, Frontier, Mary Kills People, Republic of Doyle, Rookie Blue, Eyewitness, Book of Negroes, Hatching Matching and Dispatching and films such as Hunting Pignut, Cast No Shadow, A Christmas Fury, Crackie, Down to the Dirt, and First Round Down.

Hynes is the creator, an executive producer and lead actor for the CBC comedy series Little Dog, which ran for two seasons.