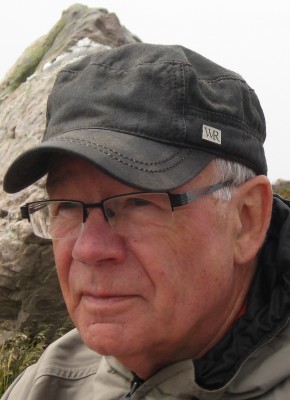 Stan Dragland is originally from Alberta and now lives in St. John’s, Newfoundland. He is Professor Emeritus, Department of English, the University of Western Ontario. He was founder of Brick magazine and Brick Books, and is still active with the latter. Peckertracks (1979) was shortlisted for the Books in Canada First Novel Award; Floating Voice: Duncan Campbell Scott and the Literature of Treaty 9 (1994) won the Gabrielle Roy Prize for Canadian literary criticism; Apocrypha: Further Journeys (2003) won the Newfoundland and Labrador Rogers Cable Award for non-fiction. Dragland has published numerous other books, including fiction, non-fiction and prose poetry. His latest book (2017) is Gerald Squires, a retrospective of the life and art of the acclaimed Newfoundland and Labradorian artist.

12 Bars, Dragland’s publication with Running the Goat, was co-winner of the bp Nichol Chapbook Award.