Story of the Dance 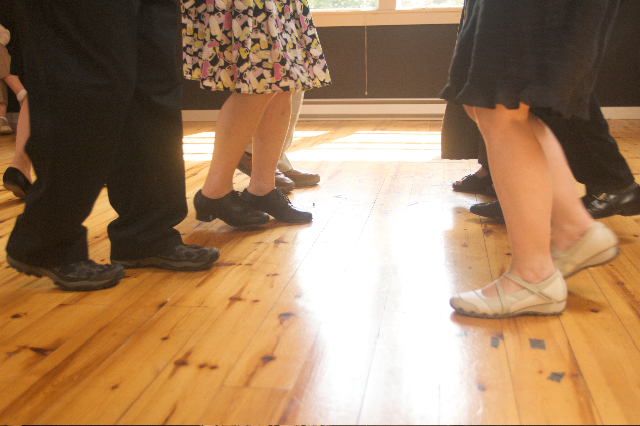 A traditional set dance for four couples, Running the Goat is commonly associated with Great Harbour Deep on Newfoundland’s Great Northern Peninsula; this small fishing community has been resettled, but the dance remains a distinct testament to the spirit and culture of that outharbour, and of Newfoundland and Labrador.

Running the Goat, like most set dances, has a lovely and somewhat complex geometry. Adopted by dancers in St. John’s, who were interested in preserving the traditional dance of Newfoundland, the Goat has evolved from its outport original. Occasionally the figures will be run in a slightly different arrangement—“The Cartwheel” might precede or follow “Couples Cross Over”, for instance—and “The Whip”, the dance’s wild finale, is a St. John’s addition. More significantly, it has been shortened, with many repetitions removed. In Great Harbour Deep, the dance could take close to three-quarters of an hour to complete; the contemporary version runs between 15 and 20 minutes, depending on the speed with which the accompanying musicians run through the Goat tunes. But whatever that speed, the dance is spirited and sexy, exhausting and exhilarating.

The first time I ran the Goat, I was awash with its momentum and grace, aware only of rhythm, movement and colour, as my body fell in with the beat of the bodhran: it was an entirely visceral, and completely transcendent, experience. The dance had me from the first Circle Left.

When it came time to name the press, I chose Running the Goat because I hoped someday to capture something of the joy and spontaneity, the playfulness and intensity of that first dance in a handmade book; more than a dozen years later, I still hope readers find some hint of that visceral and organic beauty in the books I make.

The photographs of the dance that follow were taken one hot August afternoon in 2010 at Ned Pratt’s photography studio in St. John’s, which, it turns out, is a perfect spot to run the Goat.

Thanks, too, to musician Stan Pickett. And to Ned Pratt for his hospitality, patience, and imagination, and for these lovely photos.